Automobile self starter also known as starter motor or simply starter is an electric motor initiates rotational motion in an internal combustion engine before it can power itself. The electric starter ensures that anyone could easily start and run an internal combustion engine of any vehicle car. One of the important feature of these electric motors is a soft on/off electronic switch for easy operation.

Automobile self starter or starter motor are known for flawless performance and high durability. These parts find application in trucks, tractors, cars, bikes and ATV of all models and makes. These starter motors are equipped with various high quality components made by renowned companies. These motors are highly dependable and economically priced. These are motors are capable to suit various applications. 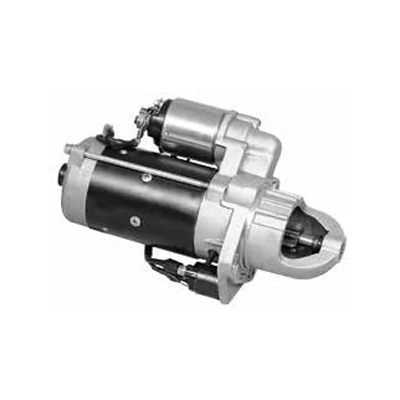 Internal combustion engine requires the pistons to be moved before the ignition phase of the cycle. This means that the engine must be set in motion by an external force prior to the action in which it can power itself. Based on the same principle, the First Generation motors used hand cranks to start the engine, but it was difficult, and dangerous to crank-start an engine. Although crank had overrun mechanism, when the engine started, the crank could begin to spin along with crankshaft. The person starting the engine had potential risk of injury from the crank. Additional care had to be taken to prevent back firing; with an advanced crank setting.

While the need for self starter motor was fairly obvious as early as 1899, Clyde J. Coleman applied for U.S. Patent 745,157 for an electric automobile self-starter. However, inventing motor with that could successfully work in all the conditions did not occur until 1911 when Charles F. Kettering of Dayton Engineering Laboratories (DELCO) invented and filed for U.S. Patent 1,150,523 for the first useful electric starter. This type of starter motors were first installed by Cadillac on production models in 1912. The starters also worked as generators once the engine was running, a concept that is now being revived in hybrid vehicles. The Second Generation electric starters ensured that anyone could easily start and run an internal combustion engine car.

The credit for developing Third Generation starter motor goes to Chrysler Corporation. In 1932, introduced a starter incorporating a geartrain between the motor and the driveshaft. Rolls Royce had introduced a conceptually similar starter in 1946, but Chrysler's was the first volume-production unit. The motor shaft had integrally cut teeth forming a drive gear which mesh with a larger adjacent driven gear to provide a gear reduction ratio of 3.75:1. This permitted the use of higher speed, lower current, lighter and more compact motor assembly. This starter formed the design basis or the offset gear reduction starters now employed by about half the vehicles on the road.

Starter Motor is instrumental for initial engine rotation. It consumes a large amount of battery current, which is also shared by other elements of the circuit. The common belief is that the current produced by battery gets distributed to the ignition system to start the engine instantaneously. However, it is not the case. Electric current can't set crankshaft in motion, as it bears a huge amount of pressure created in the combustion chambers.

The starter motor uses the electric current produced by the battery and then performs its task of rotating the flywheel. The flywheel in rotation enables piston movement. Afterwards, the piston starts functioning independently only on the induction of combustible air and fuel mixtures. Due to a heavy build and constitution, the starter motor needs massive electricity from the battery. It houses internal working ancillaries like carbon brushes, rotating armature, field coil, etc. These components in coordination make engine rotation possible. Starter motor and its internal working parts are robust enough to withstand the negative thrust produced by the internal cylinder pressures on the piston

Motor starter is connected to the positive terminal of the battery through the solenoid switch. The solenoid switch is a transitional component, which facilitates metering of the incoming electric current. The volume of current via solenoid to motor being massive, a large diameter wire is engaged for transportation of the electric current. The current starts flowing in the starting circuit when the ignition switch is turned on. Solenoid also enables movement of a lever, whose one end is connected to the solenoid and the other to the drive.

The whole procedure though seems to be overly lengthy. However, in practical reality, the entire circuit is completed within a fraction of second. All the inter-related functions happen so quick that one does not give a thought to the starter motor when a vehicle breaks down and instead the battery is blatantly put to blame.

The modern starter motor is either a permanent magnet or a series/series-parallel wound direct current electric motor. A solenoid switch is mounted on it. When current from the battery is applied to the solenoid through a key-operated switch, it pushes out the drive pinion on the starter drive shaft and meshes the pinion with the ring gear on the flywheel of the engine.

The solenoid also closes high-current contacts for the starter motor, which begins to turn. Once the engine starts, the key-operated switch is opened. A spring in the solenoid assembly pulls the pinion gear away from the ring gear. This yields the stopping of starter motor. The starter's pinion is clutched to its drive shaft through an overrunning sprag clutch, which permits the pinion to transmit drive in only one direction. This way, drive is transmitted through the pinion to the flywheel ring gear, but if the pinion remains engaged, the pinion will spin independently of its drive shaft.

Gear-reduction starters are almost entirely obsolete owing to their larger size, heavier weight and higher current requirements. A direct-drive, movable pole shoe design are mainly used for cost reduction rather than electrical or mechanical benefits. This type of starter eliminated the solenoid, replacing it with a movable pole shoe and a separate starter relay. This starter operates as follows: